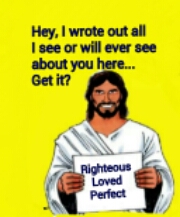 Jesus is what God thinks about you

This was given to me this morning by a friend. It was an email he had received. ..

“Here is my offering – therfore as it is impossible that we should not please Him through our faith, which clings to His righteousness. Hence it follows that a Christian is entirely without sin. And even if he sins, they can in no ways harm, but are forgiven for the sake of the inexhaustible righteousness of Christ which swallows up all sin and on which our faith relies…”

You please Him right now as you are! That is the Gospel!  You need not havethe most impactful ministry,  the world’s most extreme prayer life, or anything of the such.  If it were based on your ability to do or attain the cross would have not been needed. The cross and what happened represents pure love poured out and a new – genesis for ALL mankind. The plan from the beginning was reconciliation to the Father.

We (or at least me) have seen God as wrath and love. I no longer see that. He is love, His very essence is 100% love.  From the beginning He has called us his sons and daughters.  His only vision of you has been and only  will be of you as His beloved kids perfect as you are. Not one day we will be whole but whole now!  Pure, righteous,  forgiven,  holy, sanctified,  redeemed!

Not a license to sin but a freedom to know your identity in Him and be free to come to Him with no shame or guilt.

Romans 8:1 There is now no condemnation for those who are found in Him, all is new! You are new creations in Him!

See His love for you today and tomorrow.

One response to “Morning thoughts”